Minis seem to be the â€œinâ€ thing this holiday season as Samsung gears up for the introduction of the smaller version of its monster hit, the Galaxy S3 Android phone. Samsung previously sent out invites for an October 11 event which headlines "The size may be small" but â€œsmall can be bigâ€ or something to that effect as the invites were in German. The â€œSâ€ logo appears at the background of the invitation. These little clues set the tech world abuzz with rumors of the launch of the mini Galaxy S3. The rumors have been bolstered by a screenshot listing Samsung Galaxy S3 mini that will be available soon in blue or white. 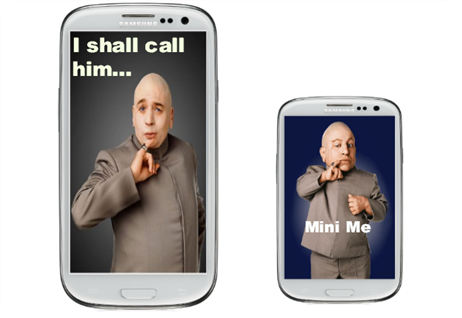 The Galaxy S3 has been consistently a top-seller but its size has been a point of criticism. A smaller sized version would naturally be Samsungâ€™s response to those criticisms negating whatever excuse a potential customer might have for not choosing their device. Since Apple increased the display size of the iPhone 5 to 4 inches, it is unlikely that Samsung will go for a display that is smaller since despite the release of the iPhone 5, sales of the Galaxy S3 has been growing at an average of nine percent weekly since August 1. Consumers have been one in saying that Samsungâ€™s blockbuster phone has a screen that is thinner and has better colors than the iPhone 5.