PLDT launched on April 29 its new line of internet services called HomeÂ Bro Ultera. The service is divided into 3 wireless broadband plans that is designed for home and small office use. The broadband is powered by TD-LTE orTime-Divisions Duplex Long Term Evolution. 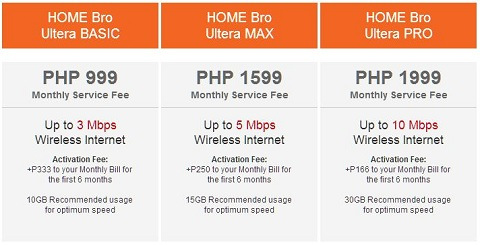 The services starts with Home Bro Ultera Basic which can reach up to 3 Mbps of Wireless Internet. Based on my experience with PLDT, their internet speed is actually reaches 3 Mbps, more or less. It does have its outages though and it can get pretty annoying especially for those who need internet to work (like freelancers). You have to pay P333 per month for 6 months as activation fee and this is added to Ultera Basicâ€™s monthly fee of Php999.

Next on the list is Home Bro Ultera Max. Its speed can reach up to 5 Mbps of wireless internet. You have to pay a smaller activation fee of only P250 for the first 6 months. This is added to the monthly service fee of Php1,599.

Last but not the least is Home Bro Ultera PRO which claims to reach 10 Mbps of wireless internet speed. It has the lowest activation fee of P166 per month for 6 months but its service fee is a whooping Php1,999.

The plans may be a little bit better than they were a couple of years ago (Plan 999 can only shell out 1 Mbps of internet speed) but the speed is still light years away from countries such as Singapore and even Vietnam! Whatâ€™s more the price of internet in our country is pretty steep as compared to other countries. Itâ€™s a good thing that thereâ€™s an ongoing Â â€œprobeâ€ right now, thanks to Senator Bam Aquino.

You will also notice that each plan has a â€œrecommended usage for optimum speedâ€ which basically means that once you go past a certain monthly cap, your speed may be decreased by as much as 30%. Definitely a bummer for gamers and movie enthusiasts.

I would have opted for these plans if not for the monthly cap. Iâ€™m a huge gamer and online movie watcher so monthly caps will definitely be a no-no. Increase the monthly cap to about 30GB for Ultera Max and 60GB or Ultera PRO, then maybe I will be interested.