We had blog before that the year 2010 is a year of Tablet and a video demo of hp slate was seen last April and now here the final announcement of HP Slate. 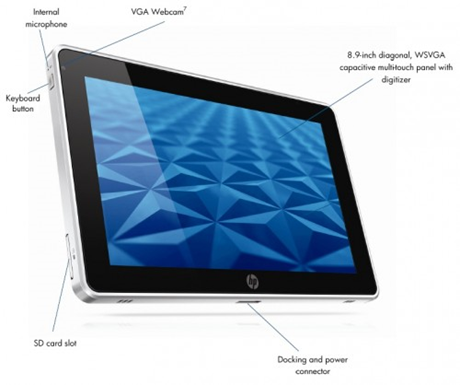 Tablet is an emerging gadget nowadays Hewlett-Packard Co has unveiled its first product for Tablet Market. We are referring to HP Slate 500 which uses Windows 7 .  it is a gadget that can compete with Apple iPad, which started the tablet revolution.

Certain specifications of the Slate are:

HP’s Slate 500 will only be available in the U.S. for now, an HP spokeswoman said. HP did not announce worldwide availability but will evaluate expanding into other markets, she said.

There are also news that HP plans to release a separate tablet for consumers with the WebOS mobile software, which was acquired from Palm. The WebOS tablet, which is yet unnamed, will be designed for activities like surfing the Web, watching movies, playing games and reading e-books, HP has said. It will be released in 2011, an HP spokesman said.

Now the question is , will this cut a portion of the iPad market ? HP Slate 500 will be Priced At $799 , Did you see the tablet introduced by Chinese ( The Apad )