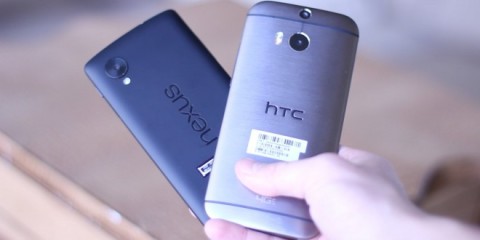 If you think Apple iPhone and iOS are overrated and youâ€™d rather spend money on an android smartphone, here are some brand and models that will definitely be worth the purchase.

First on the list is HTC One (M8). The release of this smartphone from HTC has been leaked into the internet before its actual introduction into the market last March. Nonetheless, users say that the hype about M8 is totally justified. This gadget is powered by a quad-core Qualcomm Snapdragon 800 MSM8974AB version 2 microprocessor that can run up to 2265MHz. It has a 5-inch full high-definition (HD) 1080p display that is accompanied by two HTC BoomSound speakers at the front and in-built amplifiers. M8â€™s removable battery is a 2600 mAh battery that can last up to 496 hours of standby time. The camera is dual 4MP with a panorama option. Â The Android 4.4 Kitkat HTC One (M8) is priced at around 200USD depending on the userâ€™s service provider.

Next up is Google Nexus 5. This gadget is as handy as HTC One (M8) with its 5-inch full HD display made possible by the same processor as the latterâ€™s, Snapdragon 800. It is equipped with the Kitkat Android 4.4, the latest version of the android system. Nexus 5 comes with either a 16GB or 32GB internal drive with a 2GB RAM. It also has an 8MP camera that has an auto-focus option. The non-removable 2300 mAh battery can withstand 300 hours of standby time. The deviceâ€™s price starts at 349USD for the 16GB memory up to 399USD for the 32GB memory.

Meanwhile, Samsung Galaxy Note 3 wants you to #DesignYourLife. This gadget has a 5.7-inch full HD screen that has a multi-window feature. This option allows users to open two different applications at the same time, no more toggling between several running ones. It also has a pen window feature that is really incredible â€“ users can now open a smaller window without closing the current operation. Samsung Galaxy Note 3 is currently on Jelly Bean (Android 4.3) but donâ€™t fret, it can be upgraded to Kitkat. Just like the previous gadgets, it runs through the quad-core Snapdragon. Battery life lasts up to 420 hours of standby time with 3200 mAh. The camera is an amazing 13MP with dual shot, touch focus and panorama options. Note 3 can be used with the Samsung Galaxy Gear, another innovation from Samsung which allows users to keep important applications on a compact wristwatch. With all these incredible features, the gadget is a little bit costly with a starting price at 700USD.