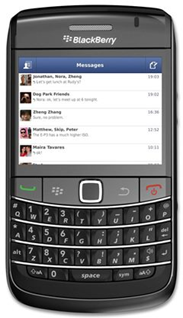 It seems that RIM is doing their best to be part of the social media. They are now introducing more apps that could get their user be involve in it.

The new app will let you see your online friends from either mobile or on PC users. You can even know when the other person is typing.

It updates in real time so you need not to refresh to get new messages. You can send messages and picture the easy way to a friend or bunch of friends. And once a reply appears, you get an alert in no time so you won’t miss a message. Also, there’s a new feature called “roommates“, from which you can start conversation to set of friends. Turn on the location so they would know where the messaging came from.

In another news, Research in Motion (RIM) releases on Sunday its new BlackBerry Curve 9360 at authorized dealers in the United Arab Emirates. In addition, the new Curve 9360 buyers can now take advantage of wallet e-payment services being rolled out in the UAE by Etisalat by yearâ€™s end because this new smartphone is now updated with Near Field Communications (NFC).

No release period or dates have been given, but we believe the app is still in development and will be released soon for download.