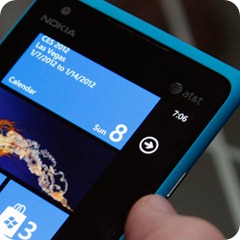 After the launched of Nokia 900 a week ago, news from the phone continues to make a noise over the net almost every day. And it’s no surprise after Lumia was named as best phone at the concluded event at the CES 2012 in Las Vegas.

Let’s take a look what in-store in the phone why it is getting much the attention. Lumia 900 is the first Windows Phone with AT&Tâ€™s 4G LTE support. It is said that it has the speed up to 50Mbps which means, it can transfer data in a snap, watch video as you click and browse the web with ease.

The 4.3-inch screen is equally powerful with AMOLED, as we all knew offers a flawless display at 800 by 480 pixels resolution. This is big improvement than previous Nokia’s with only 3.7-inch screen, the Lumia 800 and 710.

Battery life is also as equally important even if the phone features superfast mobility and quality display. With Lumia 900, it expected to deliver such, with 1830mAH battery that last up to 300 hours on standby mode and 7 hrs on the phone conversation.

Lumia 900 is simply amazing Windows Phone to date which according to reports will be available this coming March only at AT&T.