Okay, this blog is not only a tech blog site but also a Philippine based blog. So pardon me by making post not related to technology.

We would like to show our support to Congressman Manny â€œPacmanâ€ PacquiaoÂ on his fight withÂ Brandon â€œBam Bamâ€ RiosÂ on November 23, 2013 in Macao, China. This is actually an important event for Â eightÂ Divisions Boxing World Champion. This fight will determine if he will continue in boxing or will he stop boxing and retire in boxing arena .

Pacman was quoted saying in his television interview that he will do the best he can in order to give glory to Philippines. Philippines is in mourn due to the effect of Â Typhoon Haiyan that almost demolish Tacloban and Leyte in the Philippines Map. 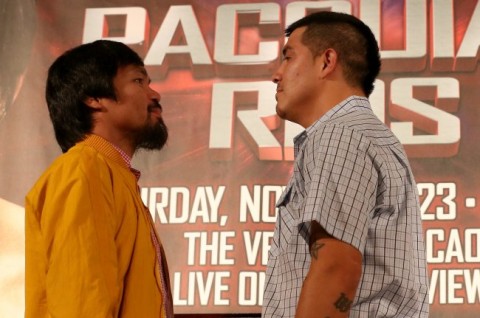 Image by Getty Image
All pressure in this game is on Pacquiao having 2 straight losses from the past.

Both are real good fighter, although Rios has an advantage with height, Pacquiao is determined to win over this game and show the world that he is still the king in his division. It’s like David and Goliath.

Yesterday, I saw in the news during coach Freddie Roach interview that Pacquiao is prepared for this fight and he is sure that the game will only took 2 rounds to finish.

So will it be Pacquiao or Rios after the match on November 23, 2013? We will immediately update this post with any information that we can get about the result of the match.