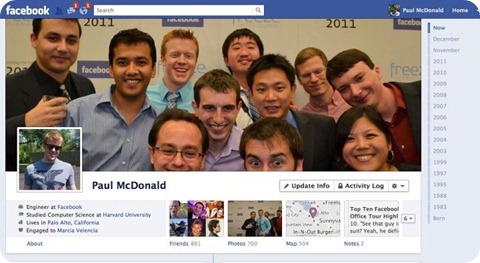 For sure some of your friends already have timeline on their Facebook account and in fact, you might be thinking to get an update. The truth is, you’re not prepared yet for the changes and you don’t want to learn how to do it, or you’re just waiting to get some help.

For whatever reasons, Facebook is set to roll out mandatory update soon to all users to timeline as announced by Facebook blog Tuesday. This update is going to happen in the coming weeks where users can either choose to wait or may start to get timeline update anytime by choice.

By choosing to get the updated timeline early, users will have seven days to check current contents for public or private before anyone has chance to see it. Or else after the period, timeline will roll with what’s in there including change on profile to new timeline with photos and stories.

An announcement will appear in your home page when it is time for an update. Facebook just announced last Thursday, January 19 the 60 new timeline apps to bring users get more involve with hobbies and interest to share with friends through these apps.

Timeline update is available on the Introducing Timeline page and on Android and m.facebook.com.