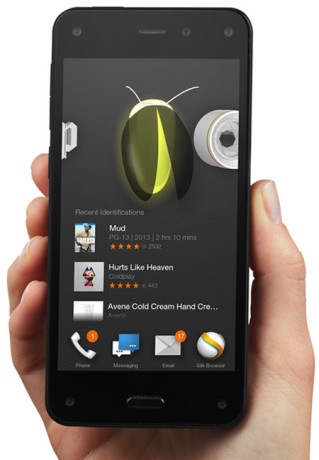 Amazon is planning to release its own line smartphones called Fire Phone. Itâ€™s most attractive feature is face tracking recognition and its ability to recreate objects in 3D. Of course, the Fire Phone is linked to the Amazon ecosystem making the soon-to-be-released smartphone a new revenue generator for the billion-dollar company.

Hold your horses â€“ the Fire Phone isnâ€™t on the shelves yet. Though the other big dogs, Android and Apple, could be scrambling in their offices right now thinking of a counterpart for â€œDynamic Perspectiveâ€ and â€œFireflyâ€, the Fire Phoneâ€™s two selling features.

With 4 low-powered cameras and 4 infrared LEDâ€™s built in the front, the Fire Phone has the capability of scanning objects and rendering them in to awesome 3D in itâ€™s 4.7-inch screen. It wonâ€™t take much processing speed though as Dynamic Perspective has its dedicated processor to do the job.

When the phone is released, Dynamic Perspective will enable you to perform one-handed gestures as commands â€“ all this without touching the Fire Phoneâ€™s screen. Also, if you tilt the Amazon smartphone while playing Amazon music, the phone will automatically show the lyrics.

Another feature that might get a lot of switchers is called â€œFireflyâ€. Firefly basically lets your camera take product of a picture and identify it. After which the Fire Phone will show you if itâ€™s available in Amazon store. It doesnâ€™t stop there though â€“ it also enables you to listen to sounds and identify texts and numbers which will be sent to Amazonâ€™s servers for identification.

So if you see a lost kitty poster, just scan the number on the poster with Firefly and you can now actually use it.

Whatâ€™s the point of creating a new smartphone if you canâ€™t actually rival the specs of your competitors? Fire Phoneâ€™s got its bases covered though. Sporting a 4.7-inch screen, it has a quad-core Snapdragon 2.2GHz, with 2GB of RAM. Pretty decent, I would say.

The camera is a 13-megapixel powerhouse with added features such as 5-element f/2.0 lens with image stabilization capabilities. You can also easily launch the camera with a push of a side button.

The 32GB version will cost US$199 with a two-year contract with AT&T. The 64GB version will cost $100 more. News of its availability abroad isnâ€™t around yet, but since Amazon is a global store, it wonâ€™t probably take long before we can get a hands on this pretty gadget.

The Fire Phone is definitely the newest addition to a line of great smartphones. Android and Apple better watch their backs now.