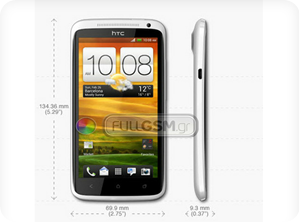 HTC is going to confirm the launch of HTC One X at MWC in Barcelona according to the report from FullGSM site.

The HTC One X, is the latest flagship phone of the company. So obviously this phone will offer some killer features to match other brands such as the LG Optimus 4X HD and Fujitsu Droid which will also be uncovered at MWC event.

HTC One X will features a 4.7" AMOLED display with Super LCD2 HD resolution at 1280 x 720 pixels, a 1.5GHz quad-core processor under the NVIDIA Tegra 3 chipset, and a Corning Gorilla Glass 2.

This phone is also packed with an 8 megapixels camera with some cool features on it. Such as the LED smart flash, f2 aperture, dual shutter camera, video recording on 1080p and an option to take shots at any time even if video recording is on progress.

It is also expected this phone will run on Android 4.0 Ice Cream Sandwich to nail the so-called flagship HTC phone.

HTC also offers a 25GB of Dropbox online storage free for two years contract. Price is not yet clear but for sure HTC will have it soon including the availability in the market.

Updates : The Full Specification of HTC ONE X has been released: