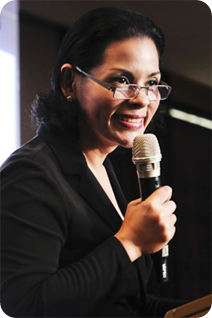 You might have read this somewhere in the net, but a story like this is a must share in my blog. I am proud to say that Judith Duavit-Vazquez, A Filipina, who is currently a director for Filipino broadcast company GMA Network, will serve her first term as ICANN Board member from October 2011 to October 2014, a three-year stint that will have her contribute to the decisions that will mark the future of the Global Internet.

ICANN was formed in 1998. It is a not-for-profit public-benefit corporation with participants from all over the world dedicated to keeping the Internet secure, stable and interoperable. It promotes competition and develops policy on the Internetâ€™s unique identifiers.

Here are some more information about Judith Duavit-Vazquez

Vasquez will be the first Asian female to become a member of the ICANN Board of Directors, beating 86 other possible candidates for the position. She is also the first Filipino to be conferred the position.

She was officially appointed by the ICANNâ€™s Nominating Committee last Aug. 5 and will officially occupy her seat at the ICANN Annual General Meeting on Oct. 28 in Dakar, Senegal.

Also joining Vasquez on the ICANN Board of Directors is Dr. Stephen Crocker, Internet infrastructure luminary and initiator of the Internet Engineering Task Force (IETF) Request for Comments (RFC) series. Crocker is chairman of the ICANN Board.

Vasquez, who is currently a director for Filipino broadcast company GMA Network, will serve her first term as ICANN Board member from October 2011 to October 2014, a three-year stint that will have her contribute to the decisions that will mark the future of the Global Internet.

Vasquez is considered one of the pioneers in Internet connectivity in the Philippines after establishing the first ICT-ready building, the 45-floor The Peak in Makati City in 1995. She is also credited for having laid the first fiber in Makatiâ€™s Central Business District in 1995. It is this infrastructure that was used for the first commercial Internet service by Mozcom, ISP pioneer, and Unionbank, Internet banking forerunner.

One of her advocacies is to provide secure and reliable connectivity when and where it is needed. According to her, a countryâ€™s level of development can be measured by accessibility to basic infrastructure, which should include communication emphasizing the Internet as a parallel and virtual highway to any cybernetic library or information pool in the world.

You may see more information about her at icannâ€™s website

It is good to know that Filipinos are now being recognized in such institution. All I can is Mabuhay ang Pinoy!