There have been a lot of leaks about Googleâ€™s smartphone but have managed to keep their upcoming tablet a secret. But some tech watchers have been able to get their hands on the device ahead of the October 29th announcement which is going to be tomorrow. 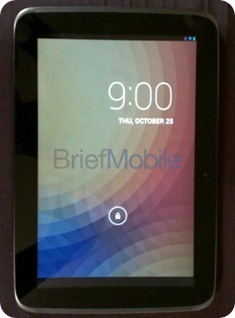 Rumors have it that the Nexus 10 tablet is designed to complement the smaller Nexus 7. The specifications of the Nexus 10 are highly indicative of the rumored features of the bigger tablet. It runs on Samsungâ€™s dual-core Exynos 5250 CPU at 1.7GHz with 2GB memory. It features a 10.1 inch screen with a 2560Ã—1600 making it almost the same as that which the 4th generation iPad sports.

Indications seem to point out that the Nexus 10 will ship with newest Android version 4.2 or more popularly known as Jelly Bean. The Android 4.2 version is said to be equipped with an updated gallery and will allow for multiple user accounts. Its quick settings menu can now be accessed through the notifications pane. But these leaked features still lack confirmation from the search giant.

One thing of particular interest among all the rumors about the new tablet is the price. While it may not sell as low as the Nexus 7, they may have to set the pricing lower than the iPadâ€™s $499. It certainly will not help the sales of Googleâ€™s new tablet if they price it at $400.