Here are some of the pictures taken during the event. 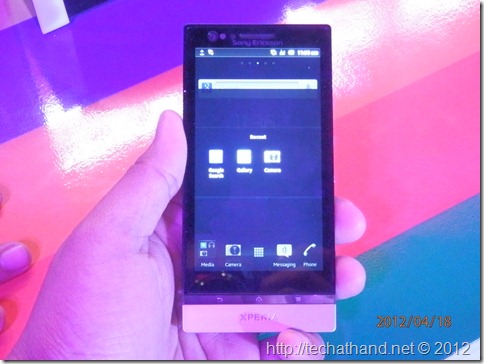 Xperia S â€“ Everything in HD

The new Xperia S, the flagship of the series, is a PlayStation-certified smartphone with a 4.3-inch Reality Display with Mobile BRAVIA Engine. It has an HD (1280 x 720) resolution screen, as well as front (720p) and back (1080p) cameras for HD recording. Its 12MP camera with Sony Exmor Râ„¢ can take pictures in just 1.5 seconds from standby mode.

Through the DLNA connection the phone could let users share and enjoy content on various screens whether on a TV, laptop, tablet or phone. HDMI cable could also be used to link the Xperia S to the TV. BRAVIA Sync can be used to control the Xperia S with your TV remote control. Xperia S delivers a full HD experience with this TV connection.

The Xperia S is also NFC (near field communication) enabled and ships with two Xperia SmartTags. This allows consumers to share content with each other as well as enjoying an increasing number of NFC applications and services.

Xperia U – powerful Sony entertainment in a stylish design

The Xperia U has xLoudâ„¢ and Sony 3D surround sound audio technology.It can also stream music to wireless speakers with a touch using DLNA.  The transparent element on the phone on itâ€™s lower portion also illuminates to match the color of photos in the gallery or the album art of music tracks currently playing. It is available in white or black, the Xperia U comes with pink and yellow exchangeable caps for the base of the smartphone in the box. The phone has a 5MP camera with fast capture, HD recording and 2D and 3D panoramic photo imaging. It has a 3.5-inch Reality Display powered by Mobile BRAVIA Engine.

It has a full aluminium unibody design, Xperia P brags of having WhiteMagicâ„¢ display technology , which is first time on a smartphone. WhiteMagic technology delivers the brightest viewing experience; even under direct sunlight. Smart power efficiency automatically adjusts the brightness of the screen to the surroundings to conserve battery life. Normal phone have only Blue, Red and Green.

The phone is available in silver and black, both with an aluminium unibody, the Xperia P has a 4-inch Reality Display powered by the Mobile BRAVIA Engine. Its 8MP camera comes with unique fast capture, HD recording and Sony technology to capture 2D and 3D panoramic images.

Xperia P offers easy HDMI and DLNA connectivity to share content on any screen. As an NFC-enabled device, it can access a growing range of NFC applications and services. It ships with two Xperia SmartTags. Smart Tags are programmable where you just have to tap the Smart Tags to the phone to change itâ€™s settings. Xperia Smart Tags makes life easier.

The NFC-enabled Xperia sola also comes with Xperia SmartTags. Xperia sola is also the first to feature Sonyâ€™s innovative floating touch technology for web browsing. Users navigate the web by hovering their finger above the screen so it acts like a moving cursor, without actually having to touch the screen. Once the desired link is found it can be highlighted and a simple tap will load the page.

The Xperia sola has a 3.7-inch Reality Display with Mobile BRAVIA Engine, 5MP camera with HD video recording, and xLOUD and 3D surround sound audio technology. The phone will be available in black, white and red.

According to Sony the unit was build with Sonyâ€™s unique and iconic identity. All unit will be sold having Gingerbread 2.3 but is upgradable to ICS (Ice Cream Sandwich)

The Xperia team will be roaming around Cyberzone Area in SM and as their starting point they will be in SM Megamall tomorrow and they will be showing to the public the strength of Xperia phones.

There were 4 units of phone being raffled during the event but unfortunately we were not able to get one but instead Sony gave us a jacket as a token of appreciation in attending the event. Thanks Sony and Stratos. Oh by the way since we came early in the event, actually an hour before the event, Stratos is so kind to treat me and my wife for breakfast while Sony is having their dry run of the event. Thanks Stratos for your hospitality.